Do you remember the days when music applications were just for playing erm, music? iTunes has evolved from a simple music player to a sophisticated home entertainment app capable of managing iPods, playing videos and making online music purchases.

But what about all those that don’t have iPods, don’t buy their music through iTunes and don’t want to watch videos in iTunes? Is it any wonder that Windows gets clogged-up when applications such as this give you no choice over the components it installs? iTunes 9 installs five additional programs without asking for your consent.

As you can see here, the components are Apple Application Support, Apple Mobile Device Support, Apple Software Update, Bonjour and QuickTime (out of shot) in order to work on Windows. 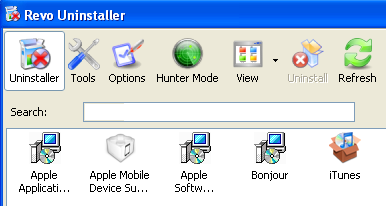 A closer look at each of these add-ons shows that most users who don’t have iPods, watch videos in iTunes or stream music elsewhere, will have little need for them:

Apple Application Support A new addition to iTunes 9 which allows you to manage iPods, iPhones and iPod Touch devices

Apple Mobile Device Support Used for syncing iPods and iPhones although not needed for other iPods e.g. Nano, Shuffle etc

Apple Software Update Checks for new versions of Apple software installed on Windows machines (not just iTunes). This is the only component you can choose not to install when you originally install iTunes. However, even when I unchecked the box, it still installed it!

Bonjour Allows you to share iTunes (and other devices such as printers) over a network, or access other users’ shares

Some of these components can be removed without damaging iTunes (I recommend using Revo Uninstaller for this). Apple Mobile Device Support and Apple Software Update I removed with no problems. Bonjour also removed successfully although I was issued a warning that I wouldn’t be able to share music on iTunes without it and should repair the issue: 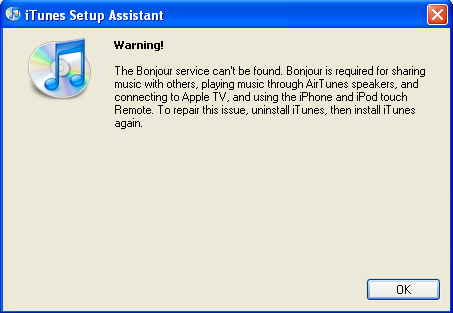 However, removing Apple Application Support and QuickTime prevents iTunes opening at all. Instead you receive the following error message:

In total then, I was able to remove 3 out of the 5 components but it wasn’t a very simple process. The point is though, it shouldn’t be necessary to do this just to have a streamlined version of iTunes on your machine.

Mac users – quite justifiably – complain of all the bloatware that Microsoft software often installs on Macs with Microsoft Office being a prime example. However, iTunes proves that Apple can be just as bad at clogging-up Windows with extra components.

A lite version of iTunes would surely be welcomed by all those Windows users who don’t need the added extras.

How to add your podcast to iTunes